“Paul, calm down, okay I’ll go see him.” I said that 13 years ago, after my friend Paul, a tie-dyer extraordinaire, had just finished bouncing up and down in place and gesticulating wildly while exhorting me to go see bassist Reed Mathis in his then-group Jacob Fred Jazz Odyssey. I did go see them soon after and have been a Reed Mathis fan ever since, having seen him in nearly every touring outfit he’s been involved with since that time. Reed is anything but a conventional bass player – rather, he actually seems to specialize in breaking the boundaries that typically confine bass players to “the pocket.” As his fan page on Facebook (https://www.facebook.com/groups/Fan…) aptly states, “Reed Mathis makes the bass soar like no other bass player. With a style all his own, he holds down the bottom end and plays leads in the upper register with equal adeptness.” He’s also been given high praise by none other than Bill Kreutzmann of the Grateful Dead. In his recent book, Deal, Billy says: “Reed Mathis…is perhaps the best bass player in the game today.”

Reed’s latest project, Reed Mathis and Electric Beethoven (EB), described as “CDM – Classical Dance Music” is about as unconventional as his bass playing. The powerful touring ensemble consists of Reed, drummer Jay Lane (Ratdog, Primus), Todd Stoops (RAQ, John Kadlecik Band, Jason Hann’s Rhythmatronix) and Reed’s old Tulsa buddy, guitarist Clay Welch. The quartet, touring in support of the album, Beathoven, which features a veritable who’s-who of top-tier jazz, rock, and jam musicians (Mike Gordon, Joe Russo, Robert Walter, the Barr Brothers, Page McConnell, Marco Benevento and Stanton Moore to name just some), plays, but doesn’t replicate, the two Beethoven symphonies, no. 3 and 6, on the album. EB uses the symphonies and their movements as the basis for their jams, but make daring leaps from the central melodic themes of the movements into sonic explorations that vary from funky to jazzy and hard rocking to psychedelic. And if you pay attention, you’ll hear quotes liberally tossed into the symphonies from musical luminaries as varied as Led Zeppelin, Miles Davis, Paul Simon and The Grateful Dead.

At EB’s November 13th show, the band played Symphony no. 6, Pastoral, which as Reed explained, Beethoven was commissioned to write as a religious piece. At the time, Beethoven was heavily into the Hindu Bhagavad Gita, which was not exactly what the commissioners of the piece had in mind. Ultimately, in an act of compromise, Beethoven wrote his Pastoral symphony as a celebration of the spiritual power and beauty of the natural world. EB varies the symphonies each night they play them and tonight the 6th symphony’s first movement, Awakening of Happiness, which clocks in at about 7 minutes on the album was rendered as a joyous 40 minute dance rager. I also heard Beethoven infused tonight with quotes and jams ranging from Sugaree and Dupree’s Diamond Blues to Mile Davis’ So What. Jay Lane also inserted his own tune, Ancient Astronauts, into the proceedings during the second movement of the symphony, Scene by a River.

Regardless of whether you have an interest in catching all the hidden goodies and I know I missed my share of them, EB is simply a fantastic, jamming band – they had the room dancing hard and smiling widely for the entire two and a half hour long Cervantes set.

Beethoven? Yes Beethoven. But done as he’s never been played before. Don’t fear the name or the seeming “classical” nature of this music. Reed Mathis and Electric Beethoven is powerful dance music for the people – people who love to shake their bones to the joy of music created spontaneously in the moment. 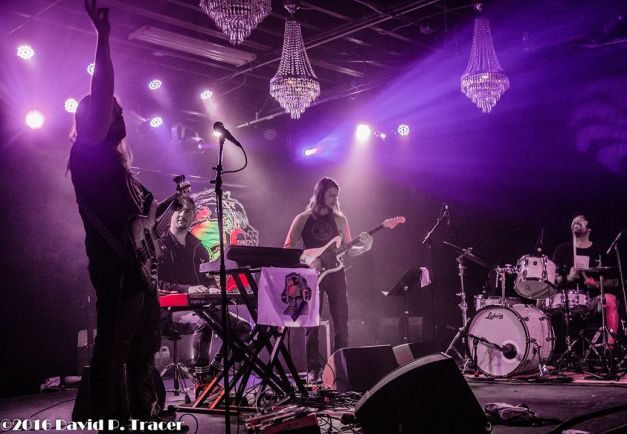 Don’t miss Reed Mathis and Electric Beethoven at their next stops!

Reed Mathis and EB’s release “Beathoven” is available at: http://royalpotatofamily.com/artists/reed-mathis/ and on iTunes.